Forbes magazine recently called David “one of the top white collar attorneys in the country.”  David is a Chambers-ranked trial litigator who counsels companies, executives, and high-level professionals in complex white collar and business investigations, government enforcement actions and related criminal and civil cases. He has successfully represented clients in the financial services sector and other industries in courts and before the DOJ, SEC, FINRA, and Commodity Futures Trading Commission (CFTC), as well as state regulatory agencies, federal grand juries and union arbitration panels.  In his 31 years of practice, he has tried 20 federal criminal and civil cases, almost all to juries that returned verdicts, and achieved remarkable victories in several high-profile matters. In addition to being recognized by Chambers USA, he has been named American Lawyer Litigation Daily’s Lawyer of the Week; a Law 360 “Legal Lion;” a Law 360 “MVP” for White Collar/Enforcement; and to the National Law Journal’s list of White Collar/Regulatory & Compliance Trailblazers in both 2018 and 2020.

Because of the highly sensitive, often confidential nature of his practice, many of David’s greatest successes are never publicly reported.  David’s focus, whenever possible, is on strategic, early efforts to persuade government and regulatory authorities not to file any charges at all against his clients. He has successfully headed off potential enforcement actions against business leaders in a broad range of industries, including all varieties of financial services (securities and commodities trading and sales, banking, investment entities, cryptocurrency and hedge funds), automobile manufacturing and sales, professional sports agency, pharmaceuticals and high technology. Areas of his focus, both inside and out of government, have included securities and bank fraud, tax and insurance fraud, cybercrime, data security, international anti-corruption law (including FCPA), along with Bank Secrecy Act (BSA), anti-money laundering (AML) compliance, and defense of obstruction of justice allegations.

When charges are filed, David has achieved extraordinary results for his clients. He has obtained not one but two federal court rulings suppressing the fruits of search warrants in indicted white-collar cases.  And in 2019, David defeated an attempt by a professional sports union to end his client’s 30-year career as a player agent, clearing his client after an evidentiary hearing before a union arbitrator.

David is perhaps best known for his widely-reported victory in defense of high-profile private equity financier Benjamin Wey against federal criminal and civil securities fraud and money laundering charges. The Department of Justice and the Securities and Exchange Commission both voluntarily dismissed their cases against Mr. Wey in 2017 after David persuaded the trial court that the FBI had violated Mr. Wey’s Fourth Amendment constitutional rights when executing search warrants at his company’s office and his home, resulting in the suppression of all the evidence obtained from those warrants.

Then, in September 2019, for another client whose business was searched by federal warrant in a completely separate federal criminal BSA and tax investigation, David succeeded in obtaining a suppression order excluding all evidence obtained from that warrant.

David has handled numerous evidentiary hearings and federal and state appellate arguments in criminal and civil matters, both in and out of government. His courtroom successes include a 2016 trial victory in federal court in Arizona for his client, Marvel Entertainment, in which he defeated a claim that Marvel stole a patent holder’s design for a well-known Spider-Man role-play web-shooting toy.

David frequently writes and speaks on Fourth and Fifth Amendment issues in white collar matters, as well as the attorney-client privilege in the context of corporate and criminal investigations. He has been a featured speaker at the annual national meeting of the Association of Corporate Counsel (2019), the National Association of Criminal Defense Lawyers (2018 Spring Meeting), and the New York Council of Defense Lawyers’ annual retreat (2018). He has been frequently quoted in the media as an expert in federal criminal procedure and securities matters.

Between 1999 and 2009, David served as an Assistant US Attorney in the criminal division of the Southern District of New York, serving as a lead prosecutor on numerous complex white collar investigations and prosecutions, federal criminal jury trials, and Second Circuit appeals. As a member of that office's Securities and Commodities Fraud Task Force between 2005 and 2009, David investigated and prosecuted a wide variety of securities industry-related matters, including accounting fraud schemes, market manipulation, insider trading, and investment adviser fraud. Between 2002 and 2005, as a member of that office's Major Crimes Unit and a Computer Hacking and Intellectual Property (CHIPs) prosecutor, David handled complex fraud prosecutions involving computer technology attacks, data security, and intellectual property theft, as well as crimes involving corporate insurance, bank, tax, and investment fraud.

During law school, David was a Notes Editor on the Stanford Law Review. 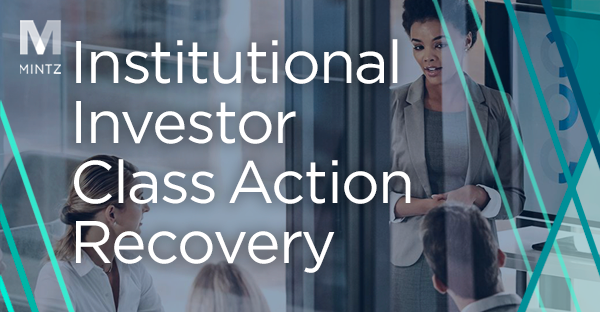 How a Prior DOJ Settlement Doomed a SEC Enforcement Action: A Volkswagen Case Study

The August 20, 2020 decision in In re: Volkswagen “Clean Diesel” Mktg., Sales Practices, and Prods. Liab. Litig., MDL No. 2672 CRB (JSC) by the United States District Court for the Northern District of California (“the Opinion”), dismissing a significant portion of the SEC’s federal securities claims against Volkswagen as having been previously released by the DOJ, serves as an important reminder for why such coordination is important and how defendants may take advantage of the failure to coordinate, as did Volkswagen.
Read more
Read less

Federal Prosecutors Have Requested Nearly 1,000 Search Warrants So Far In 2022

The New York Law Journal reported on a new indictment in a federal white collar crime case in the Eastern District of New York. Mintz Member David M. Siegal was quoted as counsel for the defendant, John Drago.

Mintz Member David Siegal has uncovered yet another violation of a client's Fourth Amendment rights (unreasonable search and seizure), this one in the Eastern District of New York. Forbes covered the development in the case, United States v. Drago, and noted Mr. Siegal as “one of the top white collar attorneys in the country.”

The New York Law Journal reported that the defendant in a federal white collar crime case will get some of his business records back, now that a U.S. District Judge in the Eastern District of New York has found that they were seized through an illegal search warrant and must be suppressed. Mintz Member David M. Siegal is representing the defendant in the case, United States v. Drago.

The New York Law Journal reported that a U.S. Magistrate Judge in the Eastern District of New York recommended the suppression of evidence from a white-collar crime investigation, finding that the evidence was obtained under a search warrant with “plainly unconstitutional” language. Mintz Member David M. Siegal is representing the defendant in the case, United States v. Drago.

Law360 reported that a U.S. Magistrate Judge in the Eastern District of New York recommended the suppression of evidence from a white-collar crime investigation, finding that the evidence was obtained with a non-specific warrant that violated the Fourth Amendment. The article included a quote from Mintz Member David M. Siegal, who is representing the defendant in the case, United States v. Drago.

One Hundred Mintz Attorneys Ranked as Leaders by Best Lawyers 2020

Remembering the Bill Cosby Extortion Case, in the Time of Avenatti

Mintz Members David Siegel and Jason Halperin authored this New York Law Journal article, which revisits the Autumn Jackson decision, and the subsequent 20 years of case law, for perspective on the Avenatti charges. The piece focuses on the challenges federal prosecutors face in trying to make reputational-threat based extortion charges stick.

Fraud in Cryptocurrency, and How the SEC Is Applying Federal Securities Laws to Stop It

This New York Law Journal outside analysis column discusses the rapidly growing cryptocurrency space and how multiple federal and state agencies are trying to regulate these evolving markets. The column is authored by Mintz Members David Siegal and Jason Halperin. Associates Ellen Shapiro and Matthew Novian assisted in the preparation of this column.

Playing With Fire: When the Government and Outside Counsel Get Too Close in a Corporate Investigation

This New York Law Journal special section column discusses some of the lurking pitfalls when the relationship between the government and the private law firms on which the government relies becomes a little too close. The column is authored by Mintz Members David Siegal and Jason P.W. Halperin, both of whom are former federal prosecutors from the U.S. Attorney’s Office for the Southern District of New York. Associate Peter Mulcahy assisted in the preparation of the column.

David Siegal is among those individuals featured as "trailblazers" in this special section highlighting leading white collar, regulatory and compliance attorneys.

David Siegal wrote this column. The piece notes that white-collar attorneys will continue to employ the attorney proffer to advance their clients’ interests in responding to investigations, even while on occasion accepting the consequence of some limited waiver of privilege over the facts they strategically divulge.

Federal Prosecutors Have Requested Nearly 1,000 Search Warrants So Far In 2022