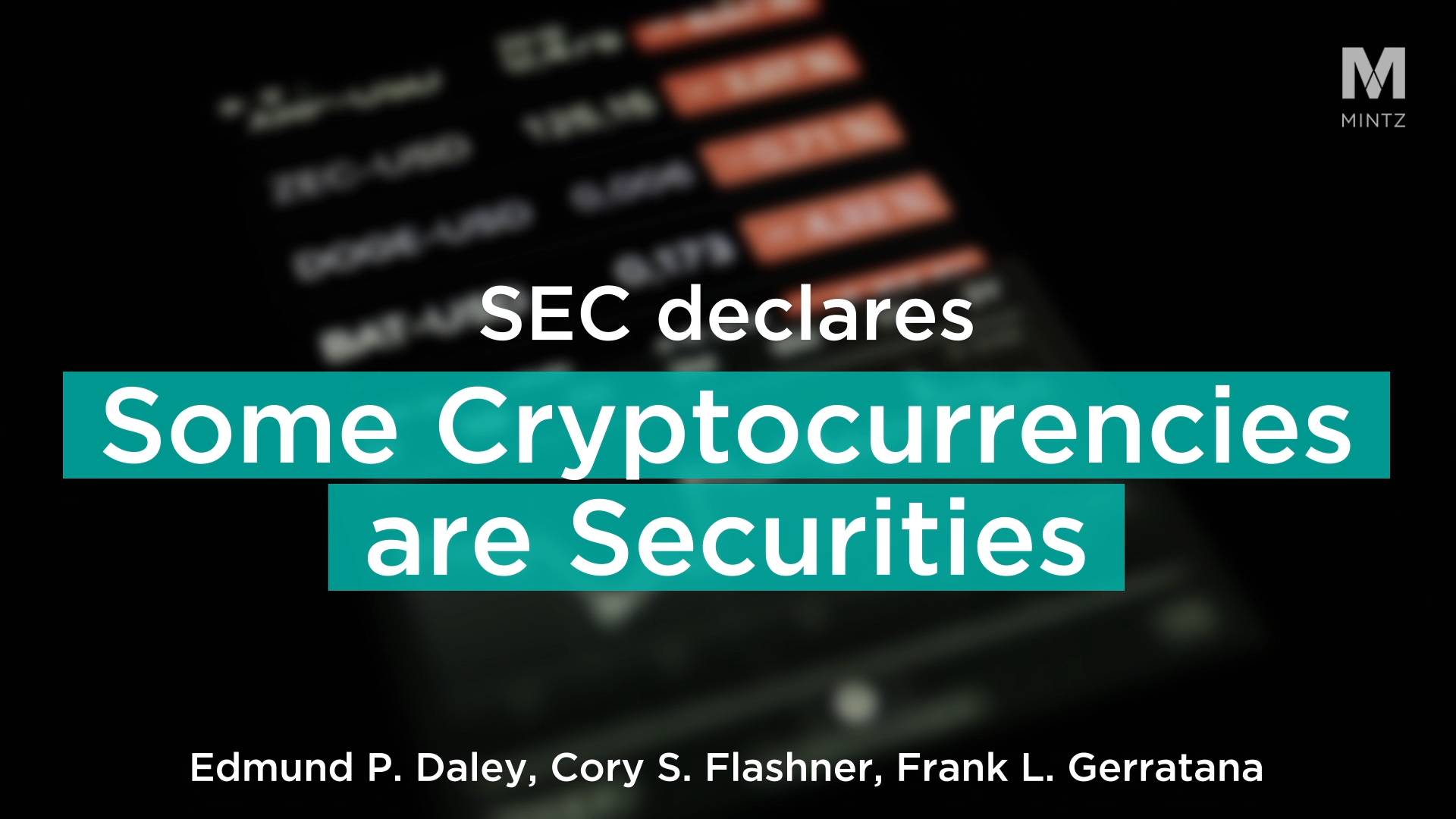 On July 21, 2022, the U.S. Attorney for the Southern District of New York announced charges against three men in the "first ever cryptocurrency insider trader tipping scheme." The Indictment charged Ishan Wahi, a former product manager at Coinbase Global, Inc. (Coinbase), Nikhil Wahi, and Sameer Ramani with wire fraud conspiracy and wire fraud (not securities fraud) in connection with a scheme to commit insider trading in cryptocurrency assets by using confidential Coinbase information regarding which crypto assets were scheduled to be listed on Coinbase’s exchanges.

The U.S. Attorney’s Office alleged that from June 2021 to April 2022, Ishan passed on information related to the launch date of tokens to his brother and Ramani to invest in the cryptocurrencies before an anticipated price jump due to a major exchange like Coinbase listing the asset. The indictment calls out $7,000 in profits from trading Tribe (TRIBE), $13,000 from Alchemix (ALCX), Gala (GALA), Ethereum Name Service (ENS) and Powerledger (POWR), and $900,000 from XYO.

In a related case, the SEC charged the same three defendants with insider trading, based on the same set of facts. The controversial aspect of these charges is that they determined that three men purchased "at least 25 crypto assets, at least nine of which were securities." "We are not concerned with labels, but rather the economic realities of an offering," said Gurbir S. Grewal, Director of the SEC’s Division of Enforcement. "In this case, those realities affirm that a number of the crypto assets at issue were securities, and, as alleged, the defendants engaged in typical insider trading ahead of their listing on Coinbase. Rest assured, we’ll continue to ensure a level playing field for investors, regardless of the label placed on the securities involved." The following digital assets were deemed to be unregistered securities by the SEC: AMP (OTC:AMLTF) (AMP), Rally Network (RLY), DerivaDEX (DDX), XYO (XYO), Rari Governance Token (RGT), LCX (LCX), Powerledger (POWR), DFX Finance (DFX), and Kromatika (KROM).

The SEC pronouncement classifying these assets as securities was met with a swift response from a Commissioner from the Commodity Futures Trading Commission (CFTC) and the CEO of Coinbase.

Commissioner Caroline D. Pham of the Commodity Futures Trading Commission was especially critical of the SEC's decision to charge securities fraud and issued a statement declaring:

“The case SEC v. Wahi is a striking example of 'regulation by enforcement.'  The SEC complaint alleges that dozens of digital assets, including those that could be described as utility tokens and/or certain tokens relating to decentralized autonomous organizations (DAOs), are securities.

The SEC’s allegations could have broad implications beyond this single case, underscoring how critical and urgent it is that regulators work together. Major questions are best addressed through a transparent process that engages the public to develop appropriate policy with expert input—through notice-and-comment rulemaking pursuant to the Administrative Procedure Act. Regulatory clarity comes from being out in the open, not in the dark.”

Commissioner Pham was not alone in rebuking the SEC decision to charge securities fraud. In a blog post after the indictment, Coinbase CEO Brian Armstrong supported the DOJ’s criminal indictment, but pushed back against the SEC and their claims that some of the crypto assets traded on Coinbase are securities. Armstrong highlighted the DOJ’s refusal to bring securities fraud charges, saying: “No assets listed on our platform are securities, and the SEC charges are an unfortunate distraction from today’s appropriate law enforcement action.”

The statement comes as no surprise to industry insiders: Coinbase has practically begged regulators for consistent structure in the past. In a statement in their website, Coinbase noted, "The SEC’s charges put a spotlight on an important problem: the US doesn’t have a clear or workable regulatory framework for digital asset securities. And instead of crafting tailored rules in an inclusive and transparent way, the SEC is relying on these types of one-off enforcement actions to try to bring all digital assets into its jurisdiction, even those assets that are not securities."

The other fascinating aspect of this case is its apparent genesis. Similar to the recent OpenSea case, this crypto investigation was jump started by a Twitter user, under the pseudonym “Cobie”, who tweeted on April 12, 2022 that he had, “found an ETH address bought hundreds of thousands of dollars of tokens exclusively featured in the Coinbase Asset Listing post about 24 hours before it was published.”

Almost immediately, Coinbase publicly replied on Twitter, noting that it had already begun investigating the matter and a few weeks later publically stated that any Coinbase employee who leaked confidential company information would be “immediately terminated and referred to relevant authorities (potentially for criminal prosecution).”

On May 11, 2022, Coinbase’s Director of Security Operations emailed Mr. Wahi to inform him that he should appear for an in-person meeting relating to the company’s asset listing process at Coinbase’s Seattle, WA office on Monday, May 16, 2022. Mr. Wahi agreed to attend but on the eve of the meeting, instead purchased  a one-way flight to India. Prior to boarding the flight, he was stopped and prevented from leaving the country. This case once again highlights the benefits of an online community that is not afraid to police itself, and continues to do so.

THE CASE FOR UNIFORM REGULATION

Perhaps the most important take-away from this case is the need for strong US based regulation and leadership in the crypto space. The increased resources that the DOJ and other regulators are allocating to crypto regulatory leadership is needed for the government to address the risks and harness the benefits of digital assets while allowing the industry to grow to its full potential.

This argument is corroborated by Coinbase's filing of a petition for rule making yesterday with the SEC, calling on the Commission to set a framework to allow the crypto securities market a chance to develop and grow. In fact, those operating in the US crypto space say the lack of clear regulatory rules is one of the biggest obstacles to industry’s development. Meanwhile, the rest of the world is not waiting for the US to lead. The European Union (EU) recently reached a consensus on its Markets in Crypto Assets (MiCA) regulation, creating the most comprehensive global regulatory framework for digital assets. "This regulatory framework will protect investors and preserve financial stability, while allowing innovation and fostering the attractiveness of the crypto-asset sector. This will bring more clarity in the European Union, as some member states already have national legislation for crypto-assets, but so far there had been no specific regulatory framework at EU level." What is unknown is how quickly the US will be able to follow suit and just how costly the delay will be for the crypto industry.

Edmund P. Daley is an associate in the firm’s Litigation section, focusing on white collar defense and financial services litigation. He represents public and private companies, investors and individuals in all manner of government investigations, enforcement actions and compliance related to financial laws. He is an active member of the firm’s Appellate Practice Group and has experience preparing motions for state and federal court cases, legal opinions and appellate briefs.